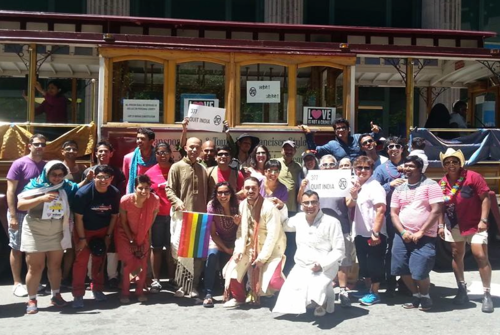 For SF Pride this year, Trikone (www.trikone.org), the oldest South Asian LGBTQ organization in the world, and ASATA, the Alliance of South Asians Taking Action, a San Francisco Bay Area group working to educate, organize, and empower the Bay Area South Asian communities, have teamed up to put out a press release calling on India's new Prime Minister, Narendra Modi of the BJP, to "End 377". You can read the full Press Release on ASATA's site:

What they are referring to is Section 377 of the Indian Penal Code, which has become an urgent legal and social issue in India, being declared by the High Court of Delhi (the highest provincial court) in July 2009 and then re-instated by the Indian Supreme Court in December 2013, saying that the matter should be sorted out by parliament. Thus the appeal to Mr. Modi as the highest elected leader of India's ruling party.

One thread in my thinking, writing, and speaking for a while has been that a lot of the social wedge issues and problematic institutions, laws, and social groups that plague so much of the "Third World", the post-colonial countries, have at their root colonial shenanigans. To me, this includes a lot of the things you see in headlines related to such varied countries as Singapore, India, Pakistan, Nigeria and Uganda. The blasphemy laws in Pakistan; the armies and military-trained despots that have kept politics and polities from evolving in healthy ways; and, yes, what the Colonial Authorities instated as "sodomy laws".

Section 377 makes my point perfectly. Here's the full text of the article on "Section 377" from the Wikipedia; not the Indian law specifically, but the general case of the sodomy law that is part of the penal code of many former British colonies:

Section 377 of the penal code in 42 former British colonies criminalizes anal sex between men and other homosexual acts.[1] The provision was introduced by British colonial authorities in the British Raj as section 377 of the Indian Penal Code, and was used as the model for sodomy laws in many other British colonies, in many cases with the same section number.
The prohibition of homosexual acts is provided for in section 377 of the penal codes of India, Malaysia, Singapore (seeSection 377A of the Penal Code of Singapore), Pakistan, Bangladesh, Burma, Maldives and Jamaica. It is the model for similar laws that remain in force in Bhutan, Brunei, Kiribati, Marshall Islands, Nauru, Papua New Guinea, Tonga, Tuvalu,Samoa, Malawi, Mauritius, Seychelles, Sierra Leone, Somalia, Sudan, Solomon Islands, Sri Lanka, Ghana, The Gambia,Botswana, Kenya, Nigeria, Tanzania, Uganda and Zambia. It was the model for since-repealed laws in Australia, Fiji,Hong Kong, and New Zealand.

So, Mr. Modi—and as challenge to other champions of their nations, communities and faiths—if you really want to take India in an independent direction and make it stand on its own, self-confident and independent, let's get rid of these odious vestiges of colonialism!