New and other media outlets love doing an "Images of XXX"—or, in a year such as this, an "Images of The Decade"—photo essay. But as 2010 comes to a close, the following recent image, taken in the closing days of the year, just sums up the year, if not the decade past, and is a good place to start the next one:

It was taken on a trip "up north" in Pakistan and captured some pictures of schools in the Swat Valley. Taken just on its own, the picture captures so much: the raw beauty, the pathos, the Pakistani spirit. But as a symbol of the year and all that came to pass in it, the image has another layer of symbolism. It was taken in the Swat Valley, Ground Zero for both of the "transcendent struggle of our time"—however you want to define the hot war being waged on The Roof of The World—and for the natural world we live in and the crises, both natural and man-made, we are faced with. And it presents you the people, for they are people, who are our future as a planet.

I could write for hours about both this and the other pictures in the Facebook album it comes from, but let me leave you with this almost more trenchant picture from the same source. This image, at least to me, adds a degree of closeness to the edge of a chasm: 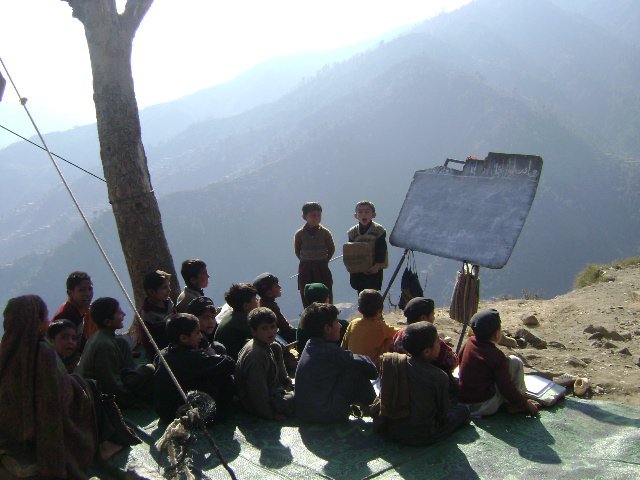 Look into this image; see if you can see past the damaged top of the blackboard (how many of the younger folks out here in the West will ever see a real blackboard?) and into the valley beyond.

What do you see?

Posted by iFaqeer at 6:49 PM No comments:

I was just saying, in reply to Arianna Huffington's comment on the recent David Ignatius article, that the Afghans always take several decades to root out outsiders. Here's a graphic that lays it out:

(Click on the graphic to enlarge.)
Posted by iFaqeer at 1:36 PM No comments:

Dalrymple, Sufis, and the Middle

This has been hanging out in my drafts folder for a little while. But the topic is one that stays current.

So, a little while back a friend/senior of mine from college forwarded the article yesterday by William Dalrymple in the New York Times titled "Sufis—The Muslims in the Middle".

I have great respect for Dalrymple Saahib, especially how he has one been one of the folks to start and unpack the exaggerations, myths, slurs, and slander that has become the received wisdom about our elders and forebears in South Asia. (I refer, of course to the Nawabs and gentry of Awadh, and such luminaries as our last native emperor.)
And it's a great article, in which he basically uses the case of Feisal Abdul Rauf, the Imam of the mis-labelled "Ground Zero Mosque" to make the case for Sufis and Sufism.
But on the question of how the mosque has become such an issue in the silliness that is the American political echo chamber and the wider discussion about Islam, radicalism and fanaticism, I wish he'd not left the "…or political calculation" half of his argument to what amounts almost an after-thought. To me, as I have said before (here, for example, or all the way back here), it is not even a question whether the Xenophobic Right—be it in the US, in India, or  within the Muslim Ummah itself—gets excited over hot button issues (such as this mosque, or the—also mis-labelled—hijab, or this or that historical site) out of ignorance or out of political calculation. To me, bit is pretty obvious that these issues are used lightening rods to, we say in Urdu, add shine to their work.
And I can't leave the discussion of Dalrymple's little tangent on the Sufis without noticing that it does seem like he's trying to project his strong feelings and experience about the South Asian Sufi tradition onto the topic of the day. While it definitely is the case that Sufism represents the "softer side of Islam", so to speak, projecting one's feelings onto Sufism some times starts feeling like a lot of wishful thinking. But I have said that before in a post titled "Sufi Bunnies".
Posted by iFaqeer at 8:08 PM No comments:

What time does "afternoon" end? My six-year old wants to know

Please help us sort this out, either in comments below (on the blog or the Facebook Notification) or via twitter.
Posted by iFaqeer at 5:09 PM No comments: Jinnah was no Ataturk. A lot of Pakistan (and diaspora) "progressives" and/or champions of democracy and so on often invoke Ataturk. And say that Asif Zardari should not be President of Pakistan. So here's the summary of what I said in one such conversation:

Jinnah was no Ataturk. One was a man of legal means, democracy and the rule of law--to the extent of disagreeing with Gandhi on rabble-rousing and demagoguery. The other was a brutal autocrat.

The person I was conversing with said something to the effect of being in favour of everything Ataturk did, but without the brutality. Huh? Brutality IS what he did. Like a lot of the policies, effects, and blowback of the kind of imperialism practiced by the European powers in general and the British Empire in particular during the Age of Colonization, (and, to a large extent, still practiced as US and Western "foreign policy" in a post-colonial, some would say neo-colonial age) I see the Young Turks as one of those things that interrupted, delayed, and perverted the healthy evolution of the Turkish state and society. (The Armenian Genocide included, which was something carried out by the same team.) Giving us the Islamist government we have there today (which I really haven't made up my mind about) as surely as putting in place and propping up Mohammad Reza Pahlavi gave us the "Islamic Republic" in Iran.

This a quick summary of a discussion I had on Facebook. If you'd like to discuss something, or think I made a leap of logic you missed, please leave a comment below, or reach out on twitter or facebook. [And apologies for the earlier subject line that mentioned Asif Zardari and ZA Bhutto. More on them later.]
Posted by iFaqeer at 10:12 PM 6 comments:

I have decided that whenever I write or say something, even if it is short and pithy and mostly unintelligible, I am going to post it here. So watch out.
Posted by iFaqeer at 9:28 PM No comments: