Into the marketplace with bejewelled limbs we go...

... so said Faiz Ahmed Faiz, probably the most popular poet of revolution in the latter half of the 20th century in South Asia; Pakistan, India, and particularly on the Left.

South Asia has a very rich tradition of poetry, one which draws on both the spiritual tradition that gave the world Rumi and Khayyam, and the revolutionary spirit of the last century or two. And because of the Sufi tradition it is steeped in, allegory, depth of meaning, and multi-faceted verbiage is the norm, rather than the exception. The words "Aaj bazaar main pa-bajaolaan chalo..." are probably some of the most recognized word. The "jewels" being described are, for the uninitiated, the ball and chain of oppression. Here's the poet himself reciting the poem, with English sub-titles, followed by one of the best renditions of the poem with music, in this case with an overlay of dramatic video:


[You can read the piece by Dr. Adil Najam, where I first found this video, here.]

But wait, the Pakistan Federal Union of Journalists has sent out a poster that puts these words above a poster that just needs to be seen to be believed. You couldn't, as we say, make this stuff up: 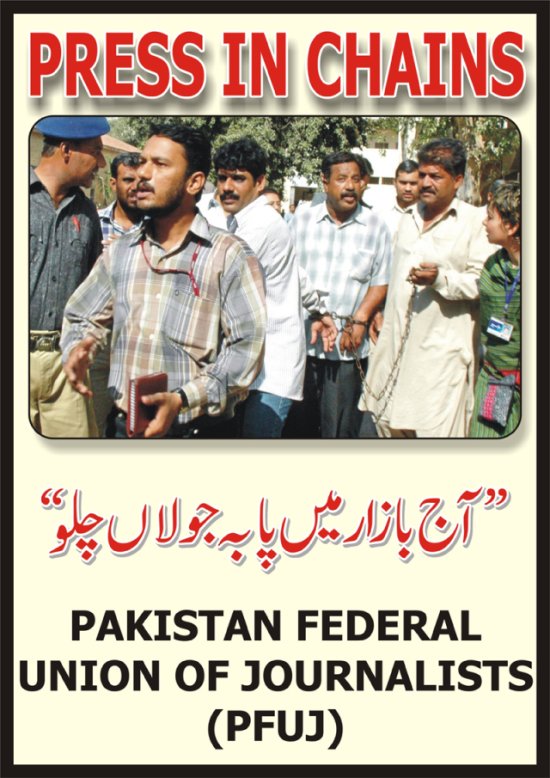 for updates. And contribute what input you can, participate in whichever way you can.

[My previous post on the issue, introducing the Emergency 2007 wiki pages, by the way, is here.]