It seems that the utter stupidity of the blocking of websites in Pakistan has gotten to a point where even the mainstream media (I never thought I would use that phrase for a Pakistani newspaper) has noticed: 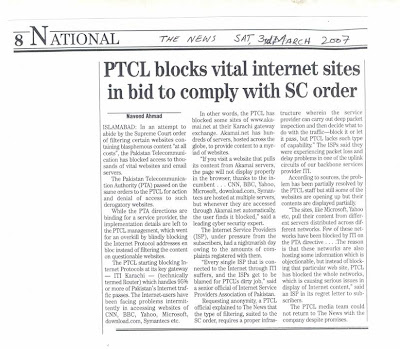 And then, on Monday:

ISLAMABAD: The country's IT-enabled industry continued to face financial losses while the common user went through agonizing times for the fifth consecutive day while accessing some leading business-critical websites as the PTCL failed to unblock the Internet Protocols (IPs) at its gateway exchange.

The News learnt from an assortment of leading Internet Service Providers (ISPs) and other IT-dependent businesses that such companies have suffered 20 to 30 per cent revenue loss over the past five days. The ISPs have been the worst hit as the outage of websites was directly proportionate to the use of Internet, thus slashing their businesses.

In trying to abide by the Supreme Court order of filtering certain websites containing blasphemous content "at all costs", the PTCL blocked access to thousands of vital websites and email servers on February 28.

The Pakistan Telecommunication Authority (PTA) had passed on the same orders to the PTCL for action and denial of access to such derogatory websites.

While the PTA directions are binding for a service provider, the implementation details are left to the management of PTCL, who went for overkill by blindly blocking the Internet Protocol addresses en block instead of filtering the content on questionable websites.

The News has been persistently trying getting the PTCL side of the story about en masse blocking of vital websites but neither the corporate communications department nor Senior Executive Vice President (IT) Ameer-ud-Din cared to call back.

Sources told The News that the ministry of IT&T has taken any action so far over the situation. Secretary Farrukh Qayyum is in the United States over the past week. The national regulator has been maintaining a strange mum over the issue as well while the PTCL officials privately blame the Pakistan Telecommunication Authority for the embarrassing situation.

However, slight improvement in accessing certain blocked websites is being witnessed around the time of filing of this report by this correspondent. Over the past four days, the whole system had collapsed and owing to the routing and blocking flaws resulting in sporadic and random outage of the key websites. Simple websites which are not on the Akmai (and other domains mentioned) also remain affected. According to some observers, the whole system crawled to perhaps 30% to 40 per cent of capacity.

Sources said, "Since the PTCL did not have a proper anomaly detection system in place and their technical people were not empowered appropriately inform the chain of command, the disaster-like situation could have been averted."

Over the past four days, emails of Internet-users through web-based servers remained blocked which had been disappearing in the cyberspace.

The mid-level PTCL techies have been brushing the issue under carpet and instead sleeping over it. "Whenever a complaint is lodged, the PTCL officials are found in a denial mode," said a top IT professional, working at the Software Technology Park II.

In his emails to the industry, a PTCL official has been denying receiving any complaint about delay or packet drop was received from other customers. The same PTCL official, in his mass email, admitted, "Some of AKAMAI server Internet Protocols (IPs) got blocked as a consequence of directives to block obnoxious/objectives. This may be the cause of slow browsing because single website links are hosted on different IPs."

Meanwhile, the capital was abuzz with rumours of massive virus [distributed denial of service (DDOS) attacks.

Wonderful and substantial blog. I wish to exchange links with you. What you think?

I want share with you the solution to unblock many blocked sites. Use SmartHide to hide IP address of yours and therefore to unblock the site you want.