This being International Women's Day, it deserves commemoration. So here's something to get the day started right:

Just a little while ago, today, I stumbled onto an amazing juxtaposition of two of the Pakistani women one can be most proud of: a piece by Asma Jehangir on Mukhtaran Mai, written as part of one of those end-of-the-year series that major magazines do--in this case, the "Asian Heroes" series from 2004.

Mukhtaran Mai, of course, is the Pakistani woman most often celebrated nowadays; the person victimized by a barbaric village council and who went on to both demand justice without regard to the cost to her, and then becoming an active presence for women's issues and rights in Pakistan and for Pakistani and Muslim women as she has travelled abroad and published a memoir/autobiography. Folks will have read reams and reams of copy--and maybe even her book. But for me, the most moving and profound tribute came last year in a personal converstation with Prof. Adil Najam. Paraphrasing from memory here: "I have sat next to and interviewed a Prime Minister, the person acknowledged as one of the greatest poets in our region in the latter half of the Twentieth Century; and Pakistan's only Nobel Laureate. But sitting next to Mukhtaran Mai, I was genuinely impressed. And, even compared to those other folks, proud of her as a Pakistani."

And all this from a poor uneducated villager, one is tempted to say--and folks have often said. But then, that just shows that folks don't really know or understand Pakistani women, women, Pakistanis, or work-a-day Muslims who live in Muslim societies, now doesn't it? But more of that later. 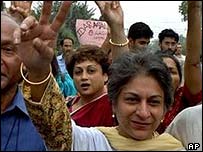 Asma Jehangir is the kind of person that makes you start a discussion with "If the Nobel Prize was really given purely on merit..." and, in her case, if the Nobel Peace Prize was really given purely on merit, and a woman activist in a Muslim country going up against all odds completely fearlessly again, and again, and then not just stopping there, but stepping onto the world stage to work on the same issues on a global level...well then, why wait till 2003? Anything else might I had the honour of spending some time stuck at Lahore airport with her and Naeem Bokhari back in 1994--and just shooting the breeze. [And this after representing the War Against Rape at a human rights moot held in her offices that very week, and watching her from afar.] Pakistanis--at least those paying attention--don't need to be told the story. Asma Jehangir famously started the first All-Female law practice in Pakistan. Opposition to Gen. Zia's "Hudood Laws" brought her onto the streets, so to speak, and not taking nonsense became her style. She famously turned around a slapped a senior police officer who had yanked her ponytail during one demonstration. She then went on to be one of the leading lights of the Human Rights Commission of Pakistan. (Something Dr. Amartya Sen is very quick to acknowledge when discussing civil society in Pakistan, for example.) She's since gone global and taken on assignments from the UN as "UN Special Rapporteur on Extrajudicial, Arbitrary and Summary Executions" and, since 2004, "United Nations Special Rapporteur on Freedom of Religion or Belief of the Commission on Human Rights since 2004". Oh, and Rani Mukerjee played what is often seen as a fictionalized version of her in a major Bollywood movie.

As I started to say above, even with all the attention focused on Pakistan and Muslims since 2001, these women demonstrate in all they say and do, and in how they say and do it, something no amount of ink--print or electronic--has been able to capture and convey. And that is that one can live in a dictatorship, one can be victimized in the most barbaric way, and yet, even in this day and age, stand up and speak truth to power, demand justice while continuing to have and draw strength from a very strong and personal faith (as Mukhtaran Mai does) and advocate strongly for things like human rights, civil society, and civil rights in the context of, and with respect for, faith, family, tradition, and values.

Today, we celebrate these Pakistani women--and Muslim women, and all women. Especially those not demanding special consideration for who they are, or what they want to do, but who are working for basic dignity and justice for themselves, for other women, and for all us.

PS: And if you want to read more from me on this topic, try this link.

PPS: I cross-posted the above on a couple of sites focused on Muslims, and added the following introductory paragraph:

On International Women's day, on this site, one would think of the Muslim Woman. But when one--anyone, Muslim or non-Muslim--thinks of the Muslim Woman nowadays, what does one think of? Well, not to push the stereotype too far, but it's either the headscarf-wearing (-and-calling-it-hijab), headscarf-pushing person demanding that her conservative values and practices be accepted and given allowances, or the other extreme; that of the memoir-publishing, interview-giving dissident or refusenik. But in all this, the person that I would really like to be heard from more is another kind of Muslim woman: the activist, the human rights lawyer, the person fight back against oppression, and to make the world a better place for all of us--comfortable with her faith, her community, and often her nation; but still being in the forefront of working to make them work better for her co-religionists, her neighbours and her compatriots.

So here [you are]--and of course, I focus on Pakistan, for it is one of the corners of the Muslim world I know best; please do post your own "nominations"!

"On International Women's day, on this site, one would think of the Muslim Woman. But when one--anyone, Muslim or non-Muslim--thinks of the Muslim Woman nowadays, what does one think of? Well, not to push the stereotype too far, but it's either the headscarf-wearing (-and-calling-it-hijab), headscarf-pushing person demanding that her conservative values and practices be accepted and given allowances, or the other extreme; that of the memoir-publishing, interview-giving dissident or refusenik. But in all this, the person that I would really like to be heard from more is another kind of Muslim woman: the activist, the human rights lawyer, the person fight back against oppression, and to make the world a better place for all of us--comfortable with her faith, her community, and often her nation; but still being in the forefront of working to make them work better for her co-religionists, her neighbours and her compatriots. My own little tribute is at: http://ifaqeer.blogspot.com/2007/03/womens-day-2007-celebratin"

While the tribute to the women fighting the system is much appreciated, I find your introduction very much troubling and a bit hateful.

Firstly, I'm a headscarf wearing woman, but I can confidently say that not even once have I "pushed" others to wear the hijab; in fact, the only time I ever talk about this subject is when I'm asked questions about it. Secondly, your implied assumption that the afore-mentioned headscarf-wearing women can not be an activist at the same time is extremely offensive. Putting all modesty aside for a minute, I can say, without any qualms, that I, as a headscarf-wearing woman, am *VERY* active when it comes to working towards anti-opression and social justice causes. What's more is that my other headscarf-wearing acquantiances are doing way more work in this sector than I can ever imagine to take on; in fact, if you take time to go to a lot of university campuses, you will notice that the number of Muslim social-justice-activists who wear headscarves sometimes (and maybe even often) outnumber Muslim social-justice-activists who choose not to wear headscarves.

Point is, this assumption of "either you are a headscarf wearing women or an activist" is not only illogical but highly offensive. Similarly, the assumption that anyone who wear the headscarf is "conservative" is such a blatant stereotype that it renders my speechless; is it not possible for a *very* liberal woman to dress modestly, just because she wants to?

I find it really disillusioning to read that while I have to fight the mainstream's stereotypes of what headscarf-wearing women are supposed to be, these same stereotypes exist within the community that I call home and identify with. While I don't judge others for not wearing the headscarf, can I ask others to do the same "favor" in return: to not judge by this one piece of cloth on my head?

Islamic women who choose to wear the hijab it allows them to retain their modesty, morals and freedom of choice. They choose to cover because they believe it is liberating and allows them to avoid harassment. Islam promotes modest dress among women. Many Muslim women wear a headscarf, often known as a hijab and in Quranic Arabic as the khimar. Many of these garments cover the hair, ears and throat, but do not cover the face. Why Wear Hijab