Note: This is part of a series of posts about one event. Please see http://ifaqeer.blogspot.com/2006/05/event-with-asifa-qureshi-at-stanford.html for the main page on this discussion. 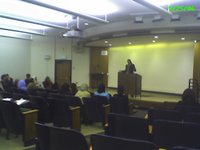 Because of her paper on Pakistani rape laws, she got asked to help with the case of Baria Mughazu (need to check that name). One of the four schools of thought in Sunni Islam accepts pregnancy as enough proof of zina. Apparently the governor of Zamfara said that he would not listen to any more Western critique, but if anyone came up with an Islamic argument he would listen. So, as she puts it, "a loosely affiliated Internet group" (NPM, I guess) approached her to write the brief. Before she could finish it, the governor moved up the punishment--apparently because of the pressure on the governor.

She goes on to say that in a similar case, in Pakistan, a woman was acquitted, with a Sharia court saying clearly that pregnancy was not enough proof.

She then discusses the very important distinction between being against the Hudood laws themselves, for example, and pointing out the misuse of Islamic law to the detriment of women, specifically. This, she says, is an insult to Islam.

On Mukhtaran Mai's case, she points out that the tribunal that meted out the "punishment" to her was not an Islamic court, but a tribal tribunal. In fact, her local Imam was the one that told the family to prosecute--and condemned the crime from the Friday pulpit.

She says that it is important to cover the history of colonialism and suchlike to understand why we are where we are today. Quotes Leila Ahmed (author of a book titled "Colonialism, Women and Islam" or something close to that) who says that a lot of the argument /rationale for colonialism was the state of women in colonized societies. And she says that that rhetoric, where feminist logic was co-opted to justify colonialsm, is still in the minds of Western feminists. This leads to Muslims equating any talk of women's rights with colonialism and for feminists to say anything that gets through to formerly (and, arguably, still) colonized societies.

All this has prevented Muslims from making their own conclusions on women's issues. And all this leads to women in Muslim societies thinking that these Westerners should just get out of the way. And things like veils, and scarves become the most important issue.

So she talks about this. The point she's raising is that in this discussion that the reasons that women adopt dress. [And lists reasons. You can look them up. :D] And then raises the issue of the hypocrisy of Western feminists who stand with people who don't want to wear stuff, but then not with those being physically prevented from wearing it. She also raised the issue of the discussion going on within the Muslim community and says that outsiders don't understand that there's a conversation happening within the community. People outside the community ignoring that there might be genuine reasons to veil; but on th other hand within the community, there is the tendency to ignore that there might be very well-informed Muslims that chose not to with a very Islamicly attitude.

So, instead of prioritizing the issue of veils and suchlike, what might have happen if these issue were not at the top of the agenda? She raises religioius education not just as a source of empowerment, but authority is ignored. For example, stressing the Islamic injunction for women to get an education might be a good way to do work that has richochet effect on other issues. Public knowledge disemination, with things like Muslim marriage contracts, rights, and other symbols.

It is very difficult for feminists to engage with thi conversation.

Her conclusion is that it would be better if both sides were working together (the Western feminists and women in Muslim societies). But it is very difficult for this to happen as long as the whole issue is framed with the attitude that Islam is what needs to be removed from the equation. People want to help Muslim women, but there is no respect whatsoever for the deep, deep faith of these people--a faith that often helps them overcome great odds. As in the case of Mukhtaran Mai.

There has to be a broader appreciation of what we are all working for and what we're working with.

[One item that got left out in my notes is something the Prof. Qureshi used to illustrate a few points along the way: The attitude of a lot of Muslim governments--and Muslims--on the Beijing Conference on women's rights was that it was an attack on Islam. Governments like the Saudi one boycotted it. And there were people there who went specifically just with the sole idea of "defending Islam". On the other hand, she related an incident of an Saudi woman wearing a veil--and some of these women wore the veil, amongst other reasons, because they wanted some anonymity precisely because of the attitude of their government--having a Westerner heckle her with a "Liberate yourself!" just passing her on the street. The speaker brought this up as an example of people talking past each other.]

This was followed by an energetic Q&A session. See the next post

Email ThisBlogThis!Share to TwitterShare to FacebookShare to Pinterest
Labels: Women, Women and Islam