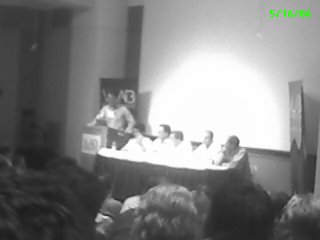 Apologise for the stream of consciousness nature of this post. And for being MIA again. Been a little tied-up and distracted. (Moving to new digs this week! is the good news.)

I went to this month's Stanford/MIT VLAB's monthly event in the Bay Area (thanks McGuj, for hooking me up!), which was on "How to Monetize New Media Channels and Make Ad Revenue Real". That's Silicon Valley-speak for "making money out of your readers/users online". Let's see what Wadiwallah has to say about the event.

One of the loudest messages from that event seemed to be that there's more money being pumped into online advertising than there is "compelling" (that word keeps coming up) content that advertisers can put it on and get good results. That will be worth following up on with time. As I said, Wadiwallah should have more to say on that.

But being in that state of mind, the column in the New York Times today titled "Building a Brand With a Blog" and about how Arianna Huffington and the Huffington Post have done since that website started caught my eye even more. Of course, the trail of how it started seeming like it would be a celebrity blog site and morphed (we say "reinvented" here in Silicon Valley) into a place with lots of different voices is something we are familiar with here in Silicon Valley in the context of how ventures, particularly those related to the Internet, evolve and change to become successful.

One aspect I have been keeping an eye on since the HuffPo started, is the number and quality of Muslims voices on it. It seemed like a site providing an outlet to voices that one usually doesn't hear would be a good venue to get some different voices out there. (Yes, most of the people are not disadvantaged; but they are not people you hear discussing current affairs and social issues.)

At first blush, maybe because I am as paranoid as the next Muslim, the only name I noticed was the ubiquitous Irshad Manji. And that didn't bode well. You've seen what where I think she sits in this whole discussion. But then, along the way, I noticed what the HuffPo was doing. Their were Muslim voices on there--and ones that were saying the very things most Muslims would like to bring to the table. What follows here are some notes I took a while back, while digging in to the HuffPo:

One writer, for example, is described in his profile as follows: "...a writer based in New York. He is a contributing editor at CARGO Magazine (Conde Nast), and writes the regular 'Classics' column for the magazine. Majd has also written for GQ (Conde Nast), the New York Times and the New York Observer." And I have to say, I am impressed by both the background of this writer, and his writing. Take for example, the post, titled "Karen's First Baby Steps":

Check out the full list of what he's written:

Another write has a similar background. The name is Cenk Uygur, a nice Turkish name. Check out what he writes:

So on balance, I have to say I am impressed by what the HuffPo is doing in this regard. One thing I think might be worth doing--maybe as part of the The Muslim Center's efforts is to do a "HP Blog, Muslim Edition". I wonder how they'd react if I approached them for a co-branding discussion...