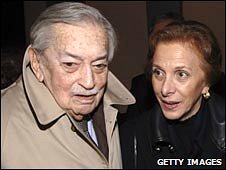 The news that Ertuğrul Osman, the "Last Ottoman", the last grandson of an Ottoman Emperor—or, to put it more clearly, the Head of the House of Osman, the erstwhile ruling house of the Ottoman Empire, and the last house to hold the office of "Khalifa" and "Ameerul Momineen" to all Muslims with any seriousness—had died came in the form of two contacts posting a news item on Facebook. (One posted the NY Times story, and another, the BBC one.)

My first reaction was to ask who the next Head of the House of Osman would be. (A question that is not answered by either of the above stories from the mainstream media, and for which one has to turn to the Wikipedia. Apparently it's a gentleman by the name of "Osman Bayezid Osmanoğlu", who doesn't even have an entry on that encyclopedia yet. PS, Sept. 25, 2009: An article has since appeared.)

Then someone who sounds Turkish themselves judging by her(?) name, said "[a]s a side note, many secularists in Turkey are no longer so proud/happy about Atatürk having kicked the Sultan and his family out, because obviously the Osman family would have made much more 'presentable' heads of state in their view than the current headscarf-wived PM and President!"

From where I sit, that's the point a lot of us who think of ourselves as moderate have always made; extremism breeds extremism. For all it's modernization, Attaturk's policies were a really extreme response to where Turkish--and the wider Muslim--society and nation found itself. Who knows what might have developed had critical parts of the Muslim world evolved gradually as much of "The West" did. Instead, what happened was that a bad situation engendered a radical solution, which is now creating its own blowback...and so continues the circle of life...

Rest in peace, Son of Osman, we never knew ye—or what might have been

اِنٌا لِلٌہ واِنٌا اِلیہی راجیعون as we say; from Him to do we come, and to Him to we return.
Posted by iFaqeer at 1:25 PM

Lave this post! Can I quote in my blog please!?