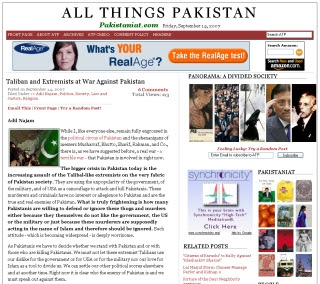 Adil Najam's recent post on Pakistaniat is quite a cry of pain and a call to arms; he's not someone that jumps into political frays--least of all on a site he's invested blood, toil, tears, and sweat in building over the last year and a half as an inclusive space. Do read it.

Over the weekend, I got quite an education on the history of violence on Pakistani campuses--most specifically, the one I ended up on in the late 80s-early 90s--at an alumni convention here in Silicon Valley, and will post my thoughts on that as soon as I can. (I am trying to tone them down.)

And the point is not that I think no one has the right to hold the political, theological or social opinions the Taliban, the Jamaat, or anyone else holds. But subverting the writ of the state is not in the tradition of The Prophet of Islam. (SAW) He did not take up arms until a community elected him Head of State and he was at the head of a government.

thanks for sharing its awesome really appreciated