Two things. First, take a look at the lawyer in the upper right hand corner of this graphic (from Dawn, the "senior" of Pakistan's two major English dailies): 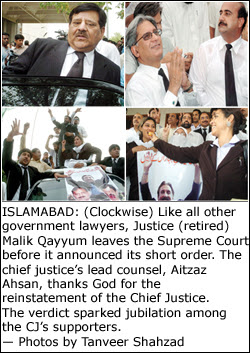 This is the man who actually led the legal battle to reinstate Pakistan's Chief Justice. I don't know, just something about his gesture of thanking The Almighty says so much. And that he's quite a dapper-looking gent doesn't hurt either.

Second point: who's this Chief Justice of Pakistan? Here's the AFP report, via Dawn:

The 59-year-old judge, in his signature black suit, has been showered with rose petals by tens of thousands of cheering supporters on a series of road shows since President Musharraf suspended him for alleged misconduct in March.

On Friday, the Supreme Court reinstated him and overturned the charges against him, sparking jubilant celebrations outside the court.“This man has shown a lot of courage,” said political commentator Shafqat Mahmood.

“If he had any personal mistakes in the past they have been superseded by his exemplary fight back against Musharraf.”

Justice Chaudhry’s journey began on March 9, when television footage showed him being summoned to meet Gen Musharraf, in army uniform, at his residence to answer the charges against him.

It was an unprecedented moment in the country’s 60-year history and sparked outrage among the lawyers’ community.

The charge-sheet against the Chief Justice included claims that he abused his position to land a top police job for his son and get cars he was not entitled to. He was also accused of ordering intelligence agents to spy on other judges.

The judge later said he was detained for five hours and pressured to resign by top intelligence chiefs, but refused to do so. He was kept under virtual house arrest for several days.

Ironically, Mr Chaudhry was one of the judges who validated Musharraf's takeover and dismissal of the civilian government of former premier Nawaz Sharif after a bloodless coup in 1999.

President Musharraf appointed him as chief justice in 2005 and personally swore him in -- providing the only other picture of the two men together, with Mr Chaudhry in ornate ceremonial robes and judge's wig.

But his backers say Mr Chaudhry started to anger the government by breaking with precedent and taking notice on his own jurisdiction of some 6,000 cases, particularly on human rights.

One landmark decision was the overturning of a lucrative sale of the Pakistan Steel Mills to a private consortium last year, which embarrassed its brainchild, Prime Minister Shaukat Aziz, and sparked allegations of corruption.

Another significant development was the way the Supreme Court used its powers to delve into the forced “disappearances” of hundreds of people, taken away by the all-powerful intelligence agencies as part of the “war on terror”.

Many of the missing people were linked to a three-year insurgency by autonomy-seeking tribal militants in Balochistan, Mr Chaudhry's home province.

The Chief Justice's crusading stance raised fears that he would cause trouble for President Musharraf ahead of presidential and parliamentary elections that are due in the coming months.

President Musharraf hopes to get himself re-elected as president-in-uniform by the outgoing parliament this year, defying the Constitution which says he should quit as head of the military by the end of 2007.

Long-term friend Hadi Shakil Ahmed said Mr Chaudhry had shown the same independent streak when they were both lawyers in Balochistan, where Mr Chaudhry joined the profession in 1974.

“He is a crusader against corruption and a staunch supporter of people's rights,” Ahmed said. “He is a workaholic and totally self-made.” Even some in the government have been won over by his stand.—AFP

The UK Solicitors are more professional then other lawyers, what do you think

what are your ideas about increasing Mobile Prices in Pakistan

Very informative post! There is a lot of information here that can help any business get started with a successful social networking campaignMobile Mall Bangladesh

increasing their strength in the world. Apk Write For Us

colourist logo are professional then other logo designer , what do you think