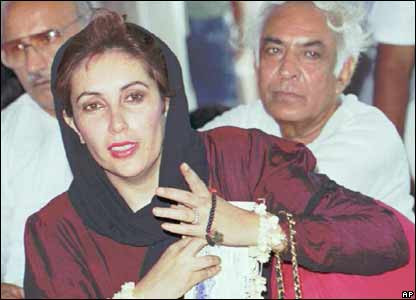 Especially living in the US or another country with an active democracy, one often thinks--okay, maybe only once in a while--that whatever their foibles, one should try to engage with Pakistani politicians. After all, the press and opinion makers often say that the only way to really set up a prosperous Pakistan, where the people can achieve their aspirations and we can see the dreams we have for our country fulfilled is to let democracy take its course and let the people actually lead the "democracy opposition" (a phrase from the WSJ or the IHT of day or two ago) to play their part.

And then you see, for example, a report in the Community section of The Pakistan Link of October 6, 2006 about Benazir Bhutto's recent visit to the SF Bay area. (You've got to give her this: she's the only Pakistani politician that does come around here regularly. The world beats a path to Silicon Valley and wants to adopt IT; the Pakistani government and industry waxes eloquent about wanting to become a powerhouse in the field. But actually come here and engage? Naaah. But I digress.) The report is by Ras H. Siddiqui, who is at this point the elder statesman amongst Pakistani journalists in Northern California. It's titled "Benazir Criticizes Waziristan Peace Treaty" and provides a very interesting view of the event and Ms. Bhutto (or Mrs. Bhutto-Zardar, as it calls her at one point), amongst other things saying that she:


"has been Prime Minister of Pakistan on two occasions. She is Chairperson of the PPP, the largest political party in that country and if a recent International Republican Institute (IRI) survey is an indicator, she is still the frontrunner to Pakistan’s Prime Minister’s slot. But that is only possible if General Musharraf holds “free and fair” elections next year in the country."

I attended an event just like this one at the same venue a year or two ago and what struck me most was the part where she pointed out, as Ras Saahab reports this time, that:


"many people in Pakistan are still living in misery. She said that the stock market had done well in the country but that most people there did not have the resources to invest in it and that their poverty is increasing."


"We should use our current influx of cash towards debt servicing and health, education and sanitation, she said. She spoke about power outages that have become the norm in the country, increased unemployment is a problem and..." so on

What you relate about her assessement of the situation in Pakistan is similar to what I heard last time she was here. And it was impressive. Just what I would like the leader of a left-leaning party to focus on.

And it's not just her; I had the honour of listening to Imran Khan in the Bay Area, too. And my reaction to him was the same: They get the problem. It's not that they are dumb. Their take on what's wrong in Pakistan is spot on.

But. But in the case of BB, I lived through both her Prime Ministerships. And the only good thing I remember is that the ban on fax machines was lifted and there was SOME loosening of the social screw that Zia had put in place...on the other side side of the balance sheet--namely what difference did this female leader of an ostensibly left-leaning party make? did women's rights make any headway? and she quotes Transparency International, but what of the record of her administration--the picture is not at all much to write home about.

In the case of Imran Khan, I have a friend who was a "polling agent" for his party in the first election. And the way they ran that campaign was beyond incompetent. And his talking a good talk about the corrupt politicians and then working with a lot of them (the way he got his seat in Parliament was to get the other Khan Niazi--his own family name, too--running in Mianwali to bow out of the race) also left a lot of disullusionment in its wake. [And I know there will be those who object to my lining up IK with BB and oldline corrupt politicians. But from the point of view of the common citizen, incompetence, or cluelessness, if you will, and corruption really don't differ in what they do to us and our nation.]

And I don't mean to pick on BB or IK. I could go on and on about Nawaz Sharif (anti-terror laws...oddly relevant today) and even the MQM.

Where am I going with this? I am not sure. I can only say that there are those of us "out here" that do want to engage with the politics of our home country--in the most high-minded, and noble sense of that word, politics, if that spirit can still be invoked. We see Michael Shakashvili in Georgia, a returned expat, get elected. But we're thinking, how can we engage? Main manje kithhay d-haawan, they main keRay paasay jaawan, to quote my favourite Punjabi saying. Or, to quote the Shahid Nadeem play, dhasso kiththay jaaway jhalli? kina bu'a kharkaaway jhalli?

Email ThisBlogThis!Share to TwitterShare to FacebookShare to Pinterest
Labels: Pakistan